Everything about the Boston bombing was staged using crisis actors, fake blood and phony injuries The Boston bombing, like Sandy Hook, was a drill presented as though it were a real event. The police on bullhorns were announcing, “This is a drill! This is a drill!”. The Boston Globe was tweeting, “Police will have controlled explosion on 600 block on Boyleston Street”, there was no blood when these explosions occurred, the backpacks they were wearing were not the backpacks that exploded, the “bloody confession” of Dzhokhar Tsarnaev was fake, and even the footage of the brothers at the Marathon was fabricated–yet our nation’s mass media, including our newspaper of record, The New York Times, published the fakery as though it were real! 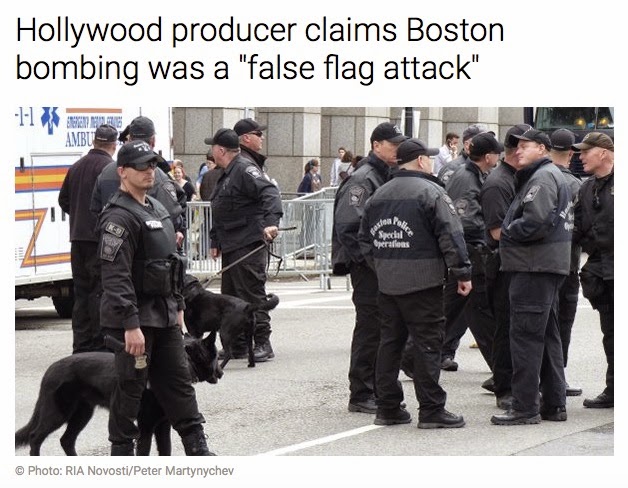 Click here for the interview with Nathan Folks.
Nathan Folks, a Hollywood producer and director, nailed what was going on during an interview with “Voice of Russia”, during which he identified one of the key players in the event as an actor he had cast in one of his own films and explained that what was taking place is known as “hyper-realistic filming” in which scenes are created to be as realistic as possible for the benefit of inexperienced troops, for example, to acquire a sense of what they may encounter in combat.
Here I want to lay out the proof that Nathan has it right by presenting overwhelming evidence that the Boston bombing was staged, in the first place, and that it was done using hyper-realistic filming, in the second.

John B. Wells, the host of “Caravan to Midnight”, featured two students of the Boston bombing, PeeKay (who is a video blogger from Australia) and David Weiss (who has also done extensive work on Sandy Hook). They spent nearly two-and-a-half hours demonstrating that what happened there was completely staged and that no one died or was even injured.
Although CTM is normally “by subscription”, about 2/3 of the way through the show, John B. Wells declared that this was so important he was going to make it public by publishing it as a YouTube video. And that was a most appropriate decision for him to have made, as you will see from watching the following presentation:

While Nathan has explained the idea behind “hyper-realistic filming”, here is a video that makes it completely vivid by illustrating how it is done. Indeed, this is an example of exactly what he was talking about in presenting scenes that are as realistic as possible so that inexperienced troops will have a sense of what they might encounter in combat.
But it can be extended to other setting, especially through the use of crisis actors, such as we have discovered was the case during the faking of the Boston bombing. We have to appreciate the importance of this technique, which can be used for good (to train troops) or for evil (to deceive the American public) for political purposes:

An article that appeared in Training & Simulation Journal (17 June 2011), moreover, elaborates on a kind of fake skin called a “Cut Suit”, a prosthetic human body worn by a person like a skin-tight gown, which includes fake skin and organs and a reservoir of fake blood.
Weighing in at 30 pounds, soldiers can make cuts into the suit or treat cuts that are already there as a form of “casualty treatment”, such as they might be expected to have to perform in combat. Because the injuries appear so realistic, these suits are especially valuable in setting where deception has a high premium. We know about fake legs and other prosthetics, but this innovation goes far beyond them: Nobody died at the Boston bombing

Here is a short-take discussing one aspect of PeeKay’s research, including a fake dummy that was used during the exercise. For those who have less than two-and-a-half hours for the “Caravan to Midnight” elaborate exposition, this video focuses on the use of a child-dummy, which appears to be hanging onto its mother, but the entire scene is fraudulent, where the child dummy is even passed around to create the impression of more parents and children in distress.
As it observes, the whole thing was fake–and there really is no room for doubt about it. We live in a world of illusion, where, as Karl Rove once observed, while you are studying our latest “created reality”, we are producing yet another:

Even the trial itself is fakery

And for anyone who entertains any lingering faith in our judicial system, here is further proof that the trial itself appears to be a staged event, where the judge, the prosecutors and the defense attorneys are collaborating in an elaborate fraud on the public and the jurors. The evidence that Dzhokhar Tsarnaev and his brother Tamerlan had nothing to do with the bombing is extensive, compelling and easily accessible.
I and others even called and wrote to Judy Clarke to offer Nathan and myself as expert witnesses on behalf of the defense. But their set pieces were in place, they were already committed to their roles and were not inclined to deviate from the script. So they simply did not bother to call back:

And the Oscar goes to: From the Rules of Professional Conduct for the Practice of Law in California, it is obvious on its face that she has violated several of its conditions. Those include two clauses of Rule 5-200, Trial Conduct, which specifies “a member (A) Shall employ, for the purpose of maintaining the causes confided to the member such means only as are consistent with truth” and “(B) Shall not seek to mislead the judge, judicial officer, or jury by an artifice or false statement of fact or law”, which she grossly violated by falsely asserting to the Judge and jury, “He did it!” She has also violated Rule 5-220, Suppression of Evidence, which stipulates, “A member shall not suppress any evidence that the member of the member’s client has a legal obligation to reveal or to produce”.  That would include video of the police with bullhorns, the tweets from the Boston Globe announcing that a “controlled explosion” will be set off during the marathon for the benefit of bomb squad activities, and other evidence presented here and elsewhere. There was not even probable cause to warrant an indictment, much less proof to justify a conviction.

21 thoughts on “Faking the Boston bombing: How it was done”