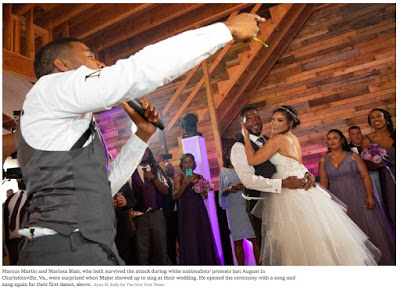 The New York Times (20 May 2018), has published a classic “feel good” story about a man who, we have been told, heroically saved a woman’s life in Charlottesville, VA, where he was tossed into the air after being struck by a Dodge Challenger driven by James Alex Fields during the right-wing rally on 12 August 2017. It makes a great story, but unfortunately none of it is true–which means that our official newspaper of record, widely assumed to record the history of the United States, has yet again fallen victim to “fake news”, one more reflection of the dismal state of journalism in the nation today.

Here are the key paragraphs of the story of love and marriage between Marcus Martin, widely heralded among the heroes of Charlottesville, and Marissa Blair, whom he is reported to have pushed out of the way and thereby saved her life, but where, according to The Times, to hear him tell it, “she had already saved mine!” The problems here are several, including that James Alex Fields was not driving the car, but more importantly that this even included two cars, two drivers and at least two takes–it was a fabricated, staged event–and the photo awarded the Pulitzer was Photoshopped! 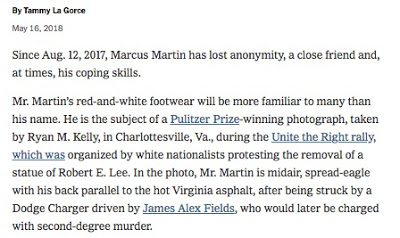 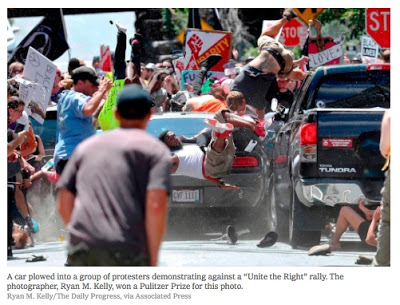 Here’s proof that the man driving the car was not James Alex Fields, a 20-year old said to have been diagnosed as a schizophrenic, but by a 32-year old military veteran who reported to command an Army Reserve Battalion in Ohio. Notice the differences in the shape and size of their skulls and that the driver is not wearing the heavy prescription glasses that James Alex Fields was photographed wearing earlier. The skill with which this vehicle backed away from the collision would have done credit to a NASCAR driver, as those who check the video record can ascertain for themselves: 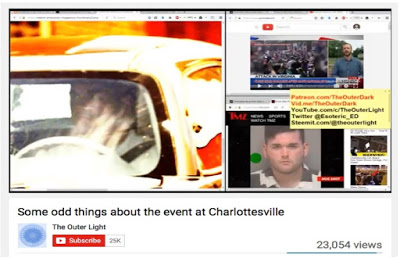 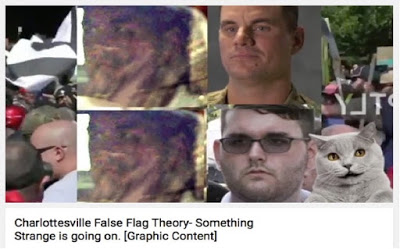 Which means that the video journalists who created these studies are more accurate in their reporting about Charlottesville than The New York Times! Anyone aware of the massive assault upon the public’s right to publish and share their research–which has assumed unprecedented proportions in scope and frequency to suppress information that exposes deceit and deception by the Deep State–will not be surprised that “Some odd things about the event in Charlottesville” is no longer available (but appears to be still on-line under a different name) but that “Charlottesville False Flag Theory–Something strange is going on” appears to have completely disappeared.

The Pulitzer Winner was Photoshopped

Those who take the time to review the evidence know that the famous photograph showing Marcus Martin flying through the air was photoshopped. There appear to have been at least three takes with different arrangements of vehicles and protestors, where the final result–published in The New York Times on its front page!–was the outcome of photographic innovation, because the scene it depicts did not occur in Charlottesville. Here’s a sampler of the photographic proof we have from multiple sources, which I have documented in my edited volume of expert studies on Charlottesville (2017): 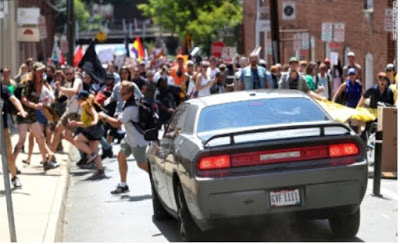 Notice that here we have a single vehicle, with no others in the vicinity. Let’s call this “Take #1”. In comparison with the Pulitzer-Prize winning photograph, there is no black Toyota pick-up to its right: 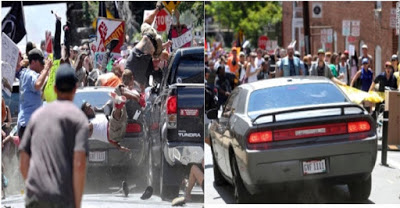 Here’s another, where the two vans had been parked at the intersection with no drivers in their seats for several minutes before the Dodge Challenger crashed into the vans to spare them crash injuries: 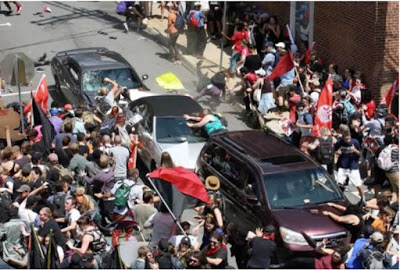 Notice the absence of the black Toyota pick-up from this version, which we can call “Take #2”. Thus, if there had been a real crash as the basis for the prize winner, it would have to qualify as “Take #3”. 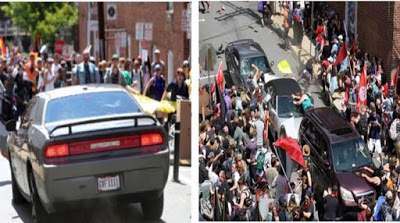 But it looks as though it was easier–no doubt, much easier!–to simply fake the photograph using the techniques of Photoshop, using several stunt men, one of whom can be seen here on the back Toyota: 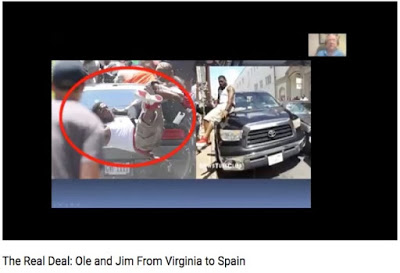 All of these images were readily available before YouTube began taking them down. Check out the fate of “Charlottesville False Flag Theory: Something strange is going on”, “The Charlottesville Psy-Op with Jim Fetzer and Dean Ryan”, and “The Real Deal: Jim and Ole on Charlottesville“. Perhaps I am especially incensed by the corruption of The New York Times–where it’s either too incompetent to be publishing on Charlottesville at all or complicit in the deception–which might be the alternative explanation. I even wrote to the UVA Department of History and the UVA Administration about this.

Email to the UVA Administration

On 19 August 2017, having published these discoveries on my blog and several other places, I wrote to more than 85 members of the Department of History at UVA, assuming–mistakenly, it appears–that they would care about the accuracy of reporting about events in the city in which Mr. Jefferson’s University is situated. I heard back from exactly one, Grace Elizabeth Hale, Commonwealth Chair of American Studies and History, University of Virginia, who wrote, “Dear Jim, I am embarrassed to hear you have any connection with this university.  Do not send me any more email. Grace Hale”. 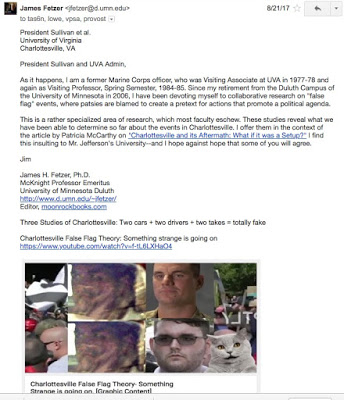 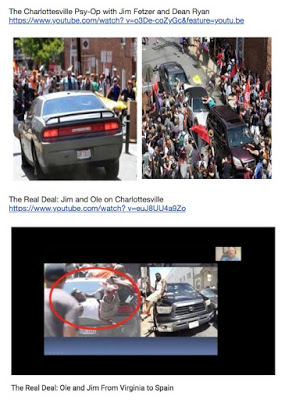 Undeterred, I continued to write to UVA’s student newspaper staff, The Daily Cavalier (19 August 2017), to the President, the Provost and the Vice-Provost (21 August 2017), to the Charlottesville City Council (24 August 2017), and to several individual members, including Kathy Galvin, Wes Bellamy, Kristin Szakos and Bob Fenwick (all 24 August 2017), where Bob initially showed some interest but would decline to pursue it. All of these letters had the same format and content, which this one to the President, the Provost and the Vice-Provost of the University of Virginia exemplifies.
Three Blunders in the Independent Report

No doubt, the 220-page Independent Review of the 2017 Protest Events in Charlottesville, Virginia, conducted by Former U.S. Attorney, Timothy Heaphy, (which you can download and read yourself) sounds very plausible on its face. In its preface, it claims to have made an exhaustive effort to put together a coherent narrative of the events that took place 11-12 August 2017,  Charlottesville, VA. But those who had actually studied the evidence knew better, where I published a post about it, “Three Massive Blunders in the Independent Report on Charlottesville by Timothy Hephy” (5 December 2017) here on my own blog. 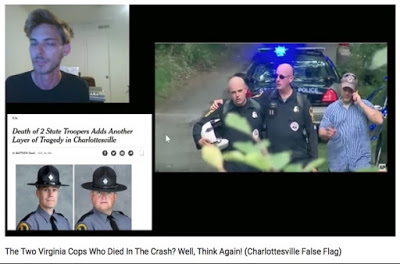 Like this new “feel good” article in The New York Times, the Heaphy Report blunders (1) in falsely identifying the driver as James Alex Fields, (2) by asserting that Heather Heyer died in the car crash (when she died of a heart attack the following day), and (3) by asserting that two UVA State Troopers were killed in the crash of their chopper, when when we have photos and videos of them walking away from the crash site, still in flight uniforms. The Times not only takes Heather’s death for granted but lauded praise upon her purported mother:

But the blunder committed by The New York Times goes far beyond the fact that Heather was not killed in the car crash (where James Alex Fields was not the responsible driver) but that Susan Bro turns out to be a crisis actor, who made her debut at Sandy Hook playing the mother of a teacher who had allegedly died there as a victim of Adam Lanza, where the entire event, like Charlottesville, was scripted–in that case, as a two-day FEMA drill presented to the public a real event. (For those who don’t know the score, watch “Sandy Hook Update”). 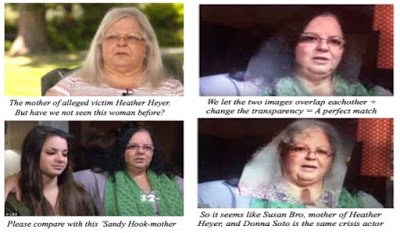 What many may find most disgusting is that The New York Times stands as our nation’s newspaper of record, yet much of what it publishes–of which this is a sterling example–qualifies as “fake news”! Either their reporters are incompetent and don’t bother to research the stories they are publishing or–worse yet, but more likely–they know better but are vassals of The Deep State. Either way, the public would be better informed by spending its time on research about “false flag” events that comes from the independent media, because what it is being told by the mainstream media–including the TV networks–is mostly false.

For those who want to take a deep breath and come to grips with what we know about JFK, 9/11, Sandy Hook, the Boston bombing, Orlando and Dallas, Charlottesville, Las Vegas and Parkland, check out “False Flags on Five Fronts”, “Fake News on Five Fronts”, “How to Spot a False Flag“, “The Parkland Puzzle: How the Pieces fit Together”, “Fake News: Issues of Identity”, or–for the more adventurous–“JFK: Who was responsible and why” and “9/11: Who was responsible and why”. You might be relieved to discover that those thoughts you have been harboring all these many years actually were rooted in logic and evidence, after all.

Jim Fetzer, a former Marine Corps officer, is McKnight Professor Emeritus on the Duluth Campus of the University of Minnesota and co-editor of moonrockbooks.com.

4 thoughts on “FAKE NEWS: The New York Times celebrates a Charlottesville Stunt Man, a Shopped Photo and a Crisis Actor (who made her debut in Sandy Hook)”