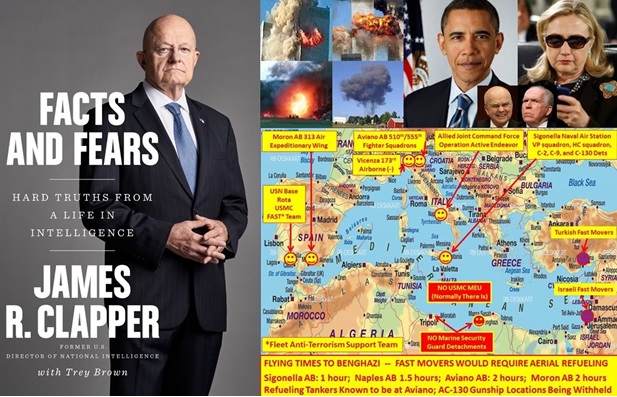 James R. Clapper, Facts and Fears: Hard Truths from a Life in Intelligence (Viking, 2018), 432 pages, $17.99, ISBN-13: 978-0525558644.
There was a time when I thought James Clapper was one of the top five flag officers among the sixty-five or so that I had worked with over 40 years.
I’ve known Clapper since 1994 and it is with distress that I conclude his judgment was diminished in 2007 when he became the first professional Undersecretary of Defense for Intelligence (USDI),[1] following Stephen Cambone, a political appointee himself with mixed talents.[2]
Between the two of them, they turned defense intelligence into a spending cesspool biased toward technical collection and mass data storage, fully in line with what one author calls “Grand Theft Pentagon.[3]”
Clapper’s tenure as Director of National Intelligence (DNI) can be summed up quite simply: one trillion dollars spent, to no good end. There is no question about Clapper’s being respected and trusted by his own professionals. Nor is there any question as to Clapper’s competence as an administrator. What is at question is the veracity of his book – and its utility to the public – when it includes twenty separate assertions that according to all available open source evidence, are lies.[4]
In fairness to Clapper, there are three pre-existing conditions that made it much easier for him to “go along” and much more difficult for him to actually sound the alarm and insist on reform – as Amy Zegart has documented so ably, the secret intelligence system is so corrupt and dysfunctional that it can only be fixed with a Presidential mandate – “fix big or don’t fix at all.”[5] Clapper went along to get along. The pre-existing conditions are:
01 Strategic: Pay to Play. The standard kick-back for both Senators and Representatives is 5%.[6] They get this amount as donations to their Political Action Committees (PAC) in return for keeping the money moving and growing regardless of need or outcome. Bill Binney has provided recurring testimony on the National Security Agency (NSA) as a case in point: they are not focused on creating Signals Intelligence (SIGINT) that will put down traitors and criminals including pedophiles as well as white collar criminals looting the public treasury; rather they are there to “keep the money moving”[7] to which I would add “and growing.” That is why NSA “leaders” killed the internally-devised and very inexpensive Thin Thread program[8] and instead spent billions on the extremely expensive externally-devised (contractor) approach – a total failure –by Science Applications International Corporation (SAIC).[9] NSA got to spend more money without actually improving, and Members of Congress were richly rewarded by SAIC and other contractors for authorizing and appropriating funds not at all related to the public interest.
02 Operational: Budget-Building. Chuck Spinney calls this the plans/reality mismatch,[10] but in the absence of an intelligence community (IC) actually capable of evaluating all threats, programs, and costs (true cost economics), and given the corruption of both past Presidents and past Congresses all too willing to borrow ever-increasing amounts of money (which is unconstitutional) for ever-decreasing capabilities, what this really is an alternative to competition for promotion – instead of fighting for promotion within a closed system where you are either promoted or retired (or fired), the game is to build the budget, hire more people, and create for yourself endless promotional opportunities. As Bob Gates himself has pointed out, no one in Washington gets fired for incompetence[11]. They do get promoted if they can build their budget and hire more incompetents. Expensive solutions that require more hiring and more spending, whether they work or not, are the preferred objective for any aspiring chain of command seeking to promote itself without having to compete for otherwise limited jobs.
03 Tactical & Technical: Cult of Secrecy & Covert Operations. I nearly fell out of my chair when I read on page 159 of Clapper’s book the following sentence:

I always cautioned the president and secretaries that intelligence work was about acquiring and assessing foreign secrets, not predicting events or reading minds.

First, mass acquisition of everyone’s data (emails, texts, calls) creates an omni-powerful central government that achieves Stasi-like, Gestapo-like, Stalinist-like, capabilities.
Second, mass acquisition makes the analysts dysfunctional – we are not doing the meta-data pattern analysis and anomaly detection but are instead burying the analysts with noise, which is why they can no longer achieve any sort of early warning on anything. We have lost the ability and the human skills necessary to predict “intentions and capabilities.”
Third, mass acquisition has turned the US IC – NSA particularly – into forensics agencies (basically a law enforcement job).

Fourth, mass acquisition has been weaponized for political purposes, with US IC agencies (as well as allied agencies such as GCHQ[27] ) using their capabilities for political advantage.

Fifth, mass acquisition is extremely expensive in its demands for data storage with its attendant energy and water consumption levels, and is doomed.

Put most simply, whatever modest achievements Clapper may claim since the mid-1990’s when he took over the General Defense Intelligence Program (GDIP) as well as the Defense Intelligence Agency (DIA), his career suffers from two tangible sucking chest wounds:
01 He failed to leverage OSINT and remained stuck at 4% performance after spending a trillion dollars.
02 He allowed NSA under Hayden to destroy Thin Thread and both machine-assisted meta-analytics and human analysis, and instead embark on a massive unconstitutional very expensive and ultimately doomed attempt to spy on everyone digitally, particularly and illegally including all US citizens.
Review of the Book
There were three aspects of the book that I found useful.
First, I was glad to read Clapper’s history and learn that he was doubly-blessed. His father was a founding Colonel in the Air Force SIGINT service; and he was selected as an aide to a flag officer early on. In combination it is clear that Clapper – whose intellect and integrity I admired in the early 1990’s – climbed quickly with those two assists, and later in life, as a trusted water-carrier to neo-conservative Bob Gates.
Second, the chapter “Consumed by Money” is worthy of inclusion in mid-career courses, and also noteworthy for observing that we are spending 20-25% of our total secret intelligence budget on Information Technology (IT) – but in a very significant omission, Clapper neglects to point out that for all that money, we process less than 1% of what we collect[28], and simply do not have the “tools for thinking” that CIA itself identified as necessary in 1985-1989.[29]
Third, the chapter “Snowden” is in my own view both a study in denial and a study in hypocrisy – but I acknowledge that people I respect feel very strongly to the contrary[30]. I am particularly galled by Clapper’s praise for Mike Hayden, who is richly deserving of being recalled to active duty for court martial – this is a man who violated the Constitution twice, first in engaging in warrantless wiretapping and mass surveillance at NSA[31], and then in fully embracing rendition and torture and then drone assassinations with a 98% collateral damage ratio, at CIA[32]. The idea that Snowden’s leaks are a threat to national security when compared to NSA’s 100,000 interception points across America and its many back-doors inserted into Dell, HP, IBM, Intel, and other products with the active complicity of the leaders of those companies (in gross violation of all their fiduciary responsibilities) is for me absurd[33].
The book falls short on multiple fronts. Sadly, it fails to actually outline lessons learned and a vision for an effective USG intelligence function capable of answering decision-support needs across all functions and levels of government. This book does not remotely approach the substance of my own writings[34], or the three hundred books on intelligence by others that I have respectfully reviewed[35]. There is exactly one good idea in this book, on page 139, where Clapper, via his ghost writer, articulates the need for a separate consolidated intelligence authorization and appropriation, eliminating the fragmentation, duplication, and mismanagement of the individual intelligence elements within each Cabinet Department. I agree.
I searched in vain for learned information about where the various intelligence disciplines from Human Intelligence (HUMINT) to Signals Intelligence (SIGINT) and Imagery Intelligence (IMINT), to Measurements and Signatures Intelligence (MASINT) or the various functional domains from analysis to counterintelligence to processing, might be improved. I note with pointed dismay that then Major General Vince Stewart, USMC, Director of Defense Intelligence Agency (DIA) who once championed OSINT within USDI, is mentioned only once in this book, and I put that down to Vince having the balls to publicly suggest that DIA today is irrelevant[36]. Lieutenant General Mike Flynn, USA, Vince’s predecessor, agreed with my own appraisal in 2014 of DIA as totally dysfunctional[37]. OSINT is of course not mentioned in this book.
At a political level, this is a book of lies that not only refuses to acknowledge the multiple false flag operations (I ran a false flag operation for the CIA) used to start wars of profit on the basis of lies, it also continues to retell many lies Clapper told while serving as DNI, the two most important lies being that NSA does not spy on US citizens (it actually collects every email and every phone call of every US citizen with those of Members of Congress being the highest priority); and that the Russians hacked the election[38]. Clapper’s vitriolic hatred for our President Donald Trump is clearly captured in the following quote on page 399:

We have elected someone as president of the United States whose first instincts are to twist and distort truth to his advantage, to generate financial benefit to himself and his family, and in so doing, to demean the values this country has traditionally stood for. He has set a new low bar for ethics and morality. He has caused damage to our societal and political fabric that will be difficult and will require time to repair. And close to my heart, he has besmirched the Intelligence Community and the FBI – pillars of our country – and deliberately incited many Americans to lose faith and confidence in them.