Mona Alexis Pressley with Dan Cromer: In Solidarity with Alex Jones – Sandy Hook father, “Lenny Pozner”, and son, “Noah Pozner”, are Both Fake
Mr. President,
The emotional impact of the Sandy Hook exercise was rooted in the reported death of children, which instilled fear into the hearts of American parents and made an indelible impression. Images of the most photogenic of the 20 who are supposed to have died, Noah Pozner, appeared world-wide. Millions of photos like this from The Guardian (2 May 2017) have been seen by a vast number of literate citizens. But it was all a monstrous fraud. We have proven that the kids were fictions made up out of photos of older kids when they were younger. Some parents even appear to have used photos of themselves.
By far the most active among the Sandy Hook parents has been the man who calls himself, “Leonard (‘Lenny’) Pozner”. He has been extremely aggressive in going after web sites by Sandy Hook skeptics, in demanding take-downs of images of him and Noah again and again and again, including of Dr. Eowyn, Dr. Tracy, Dr. Fetzer, Tony Mead and innumerable others. That was very strange activity for someone whose image has been published literally millions of times around the world. So what’s going on? 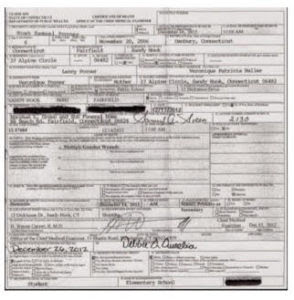 Editorial Note on Above Image: Here’s the best image of the death certificate we can find. It’s evidential value is not a function of its quality, since you can see (1) there is no file number; (2) it has the wrong estimated time of death at 11 AM, when the shooting officially took place between 9:35 and 9:40 AM. The bottom 60% is obviously different than the top. None of this depends upon the quality. We have to deal with the evidence we have.
These circumstances are suspicious enough, but when Kelley Watt had over 100 hours of telephonic conversation with Lenny and told him repeatedly that she did not believe a word he said, that she did not believe he had a son who had died at Sandy Hook and demanded proof to support that claim, Lenny, no doubt unadvisedly, sent Kelley a “death certificate” for Noah that turned out to be a fabrication. It combines the bottom 60% of a real death certificate with the top 40% of a fake, with no file number and estimated time of death at 11 AM, when it was supposed to have occurred between 9:35 and 9:40 AM.

Kelley was the first to observe that there was a striking resemblance between the young Noah and his older step-brother, Michael Vabner. Six students tested her hypothesis and determined that Noah and Michael had the same eyes, the same eyebrows, the same nose, the same ears and the same shapes of skull. Larry Rivera created a gif in which you can watch as “Noah” turns into “Michael”, in a succession of four stages. Michael recently graduated from the University of Connecticut at Storrs and put up a web site of his own, which implicitly confirms that he is one and the same with the source of “Noah Pozner”: 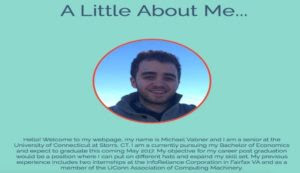 So how could we have so many photos of “Lenny Pozner” with Michael Vabner as a child, unless “Lenny” himself were the father of the child known as “Noah”? Digital image forensics applied by Dan Cromer has demonstrated that, just as “Noah” was created out of photos of Michael Vabner as a child, “Lenny” was created from old photos of Rueben. They share key facial features including their noses, eyes, skin tone, size of cheeks and facial width, even though digital editing was used to disguise them. He was not camera shy but protecting his image on TV and in Court to conceal his true identity as Reuben Vabner.

There are many other dimensions to the fraud, including faking gravestones, where the name on Noah’s was digitally stamped rather than authentic engraving. Its placement is also skewed, even though the art of engraving has become a science. But they couldn’t bother with engraving an actual gravestone for a fiction. To illustrate the fraud, Dan Cromer created a corresponding image for a gravestone for Mona:

We can now explain why “Lenny” has been so elusive and why we have photos of “Lenny” with “Noah”. The child called “Noah was in fact the son of the man calling himself “Lenny”. But “Noah” was a fiction made up of photos of Michael Vabner as a child. And “Lenny” is Michael’s father, Reuben Vabner. QED.
Sandy Hook was an elaborate hoax to promote gun control and advance the political agenda of Barack Obama and the Democratic Party where the participants have committed theft by deception and some, such as Reuben Vabner, have also perpetrated frauds upon the Courts that deserve prosecution.
Very respectfully,Mona Alexis Pressley and Dan Cromer
Reference: Mona Pressley, “Not only is Sandy Hook’s “Noah Pozner” a fake but his father “Lenny” is also a fake,” Conspiracy Truth, 17 July 2018 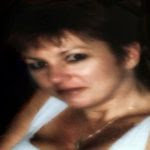 Mona Alexis Pressly, MA, MFT has frequently appeared on “The Raw Deal” and “The Power Hour”. Her research on numerous political issues, including Obama’s birth certificate, Sandy Hook and Las Vegas, has been published by Dr. James Fetzer, PENN Magazine and many other venues. 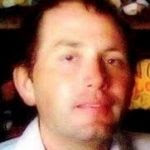 Dan Cromer, MIS, an information specialist, frequently appears on “The Raw Deal” and “The Power Hour” when James Fetzer, Ph.D., is guest hosting. His research on Sandy Hook, Las Vegas, Parkland and Santa Fe has appeared in numerous publications.
DOC (4 Pages):  Pressley Cromer Sandy Hook Pozner Fakes
Phi Beta Iota:  We are publishing the above as the author’s views, part of a narrative about Sandy Hook intended to call into question the Sandy Hook false flag operation that we do believe demands a new independent investigation, as with 9/11, the Boston Bombing, Orlando, and Las Vegas, among others. The individuals named need to be found and deposed under oath — evidently this was attempted in one instance and they refused.
See Especially:
Memoranda for the President on Sandy Hook: Is FEMA A False Flag Fake News Terrorist Node? Should #GoogleGestapo Be Closed Down?
See Also:
Memoranda for the President on 9/11: Time for the Truth — False Flag Deep State Truth!
Please follow and like us: