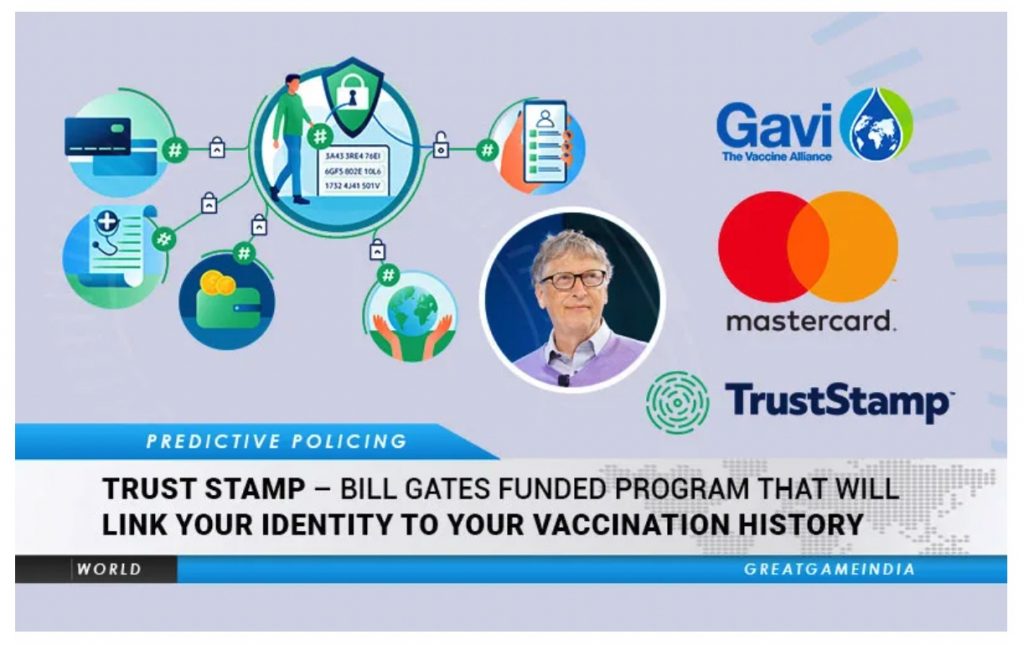 Trust Stamp is a vaccination based digital identity program funded by Bill Gates and implemented by Mastercard and GAVI, that will soon link your biometric digital identity to your vaccination records. The program said to “evolve as you evolve” is part of the Global War on Cash and has the potential dual use for the purposes of surveillance and “predictive policing” based on your vaccination history. Those who may not wish to be vaccinated may be locked out of the system based on their trust score. With the aim of being introduced in “low-income, remote communities” in West Africa and later replicated worldwide; the program is the result of a public-private partnership between the GAVI vaccine alliance backed by Bill Gates, Mastercard and Trust Stamp which is an AI-powered “identity authentication” company.

This program was to be first launched in late 2018. Trust Stamp’s advanced digital identification technology will be integrated into the GAVI-Mastercard initiative “Wellness Pass” – a digital vaccination record and identity system which is to be also linked to Mastercard’s click-to-play system powered by Mastercard’s AI and Machine Learning technology. MasterCard made a commitment that it will create a “centralized record keeping of childhood immunization”. It also describes itself as a leader towards a “World Beyond Cash”.

The future prospects of this GAVI and MasterCard partnership is worth exploring. This partnership with GAVI signifies a novel strategy aimed towards linking a biometric digital identity system, vaccination records, and a payment system into a single platform that is cohesive, coherent and synergistic.

The program was launched two years ago and has been funded with $3.8 million in the GAVI donor funds. In addition to this it received a similar amount from the Bill and Melinda Gates Foundation.

It was in early June when GAVI reported that Mastercard’s Wellness Pass program has the potential to be adapted in response to the coronavirus (COVID-19) pandemic. A month after this, Mastercard announced that Trust Stamp’s advanced biometric identity platform will also be integrated into the Wellness Pass. This was done taking into consideration the Trust Stamp’s capability of providing biometric identity globally; even at places lacking internet access or cellular connectivity and also it does not require knowledge of an individual’s legal name or identity to function.

This Wellness Program involving GAVI, Mastercard, and Trust Stamp is soon going to be tested in West Africa. Similar program was also launched in the UK. The UK government is rolling out COVI PASS – Biometric RFID enabled Coronavirus Digital Health Passports to monitor nearly every aspect of citizens’ lives in the name of strengthening public health management through a military grade tech.

The Indian government has pledged US $15 million to the global vaccine alliance GAVI over the next 5 years for the global Coronavirus vaccine project led by Britain. GAVI is largely led by the British government and Bill Gates. While the UK is GAVI’s largest funder, its implementation follows what is known as the” Gates approach”. Known as the Vaccine Cartel or Pharma Cartel by critics, such vaccines have been accused of causing atleast 38 million premature deaths worldwide.

While there is growing criticism against these organisations worldwide, India is again collaborating on similar initiatives on coronavirus vaccine with the same Vaccine Cartel. A consortium comprising Serum Institute, Gates Foundation, MIT, and Spy Biotech (a UK based biotech company) is trying to develop a vaccine using the new spy-tag vaccine development technology. A long-term Merck and Wellcome Trust venture on vaccine research, policy and manufacturing will be based in Delhi. (More details about this British led Indian Vaccination Program will be revealed in the next report.)

Trust Stamp has created a biometric identity system, using the technology called Evergreen Hash. This technology creates a “3D mask” based on a single photo, palm or fingerprint of a person. With the creation of this “mask” the “original data” is eliminated and “encrypted keys are created. These encrypted keys serve in place of a person’s name, fingerprint, and all the other information used for identification.

The electoral commission of Ghana has been trying hard to put this idea into action before the general elections happen in December, 2020. The ‘budget allocation’ of the new system has been questioned. Bright Simons, the honorary VP of the IMAMI policy think tank, claimed that “unnecessarily registration of 17 million people all over again” signifies that million of dollars are “being blown” for reasons that are unexplained.

The concept of using biometrics for national ID registration systems is a highly politicized issue. Earlier this plan to chip the human race through the digital identification program ID2020 was exposed in the Italian parliament by Sara Cunial, the Member of Parliament for Rome who denounced Bill Gates as a “vaccine criminal” and demanded Bill Gates’s arrest in the Italian Parliament.

With the medical research going at such a fast pace when a Covid-19 vaccine becomes available, this technology will be used in vaccination programs and implemented worldwide under the GAVI umbrella. The program said to “evolve as you evolve” is part of the Global War on Cash and has the potential dual use for the purposes of surveillance and “predictive policing” based on your vaccination history. Those who may not wish to be vaccinated may be locked out of the system based on their trust score.

GreatGameIndia is a journal on Geopolitics and International Relations. Get to know the Geopolitical threats India is facing in our exclusive book India in Cognitive Dissonance. Past magazine issues can be accessed from the Archives section.

For latest updates on the outbreak check out our Coronavirus Coverage.

Send in your tips and submissions by filling out this form or write to us directly at the email provided. Join us on WhatsApp for more intel and updates.