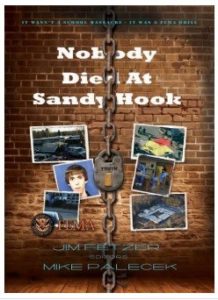 This book was BANNED by Amazon. The editor, a distinguished professor (PhD) and former Marine Corps officer, has engaged a number of citizens whose intelligence and integrity is beyond challenge.
As President Donald Trump reflects on whether to take the Zionists and Deep State down in his speech on 11 September 2018, using 9/11 Truth (and ideally also Sandy Hook and other domestic false flag truths) to protect the 2nd Amendment and destroy the fake news mainstream media and the Zionist-controlled social media known as #GoogleGestapo, we will continue to build on the series of memoranda to the President, and will deliver a second volume on false flag truth to the White House on or about 5 September 2018.
Table of Contents and Related Links Below the Fold
TABLE OF CONTENTS
Preface
Mike Palecek / Some Conspiracy Theories are True ix
Contributors xlv
Prologue
Jim Fetzer / Thinking about Sandy Hook: Reality or Illusion? 1
Part I: Early indications something was wrong
1. James F. Tracy / Medical Examiner: More questions than answers 19
2. Dr. Eowyn / Six Signs Sandy Hook Elementary School was Closed 29
3. Jim Fetzer / Wolfgang Halbig Goes for the Jugular in his FOIA Hearing 39
4. Jim Fetzer & Dennis Cimino / Shannon Hicks denies staging her “iconic” photograph 47
Part II: How we know Sandy Hook was an illusion
5. Vivian Lee / Top Ten Reasons: Sandy Hook was an Elaborate Hoax 57
6. Jim Fetzer / Even Obama officials confirmed that it was a drill 101
7. Allan William Powell (with Kelley Watt) / Fixing a Prop: Furnishing the
Lanza Home 117
8. Allan William Powell / Setting the Stage: Refurbishing the School 139
Part III: Further Proof Nobody died at Sandy Hook
9. Dr. Eowyn / No one died at Sandy Hook: The Social Security Death Index 161
10. Dr. Eowyn & Jim Fetzer / Sandy Hook: CT crime data confirms FBI Report 169
11. Jim Fetzer & Kelley Watt / Are Sandy Hook skeptics delusional with “twisted minds”? 177
12. Sterling Harwood / Every Grain of Sandy Hook: Snopes.com & plausible
deniability 187
Epilogue
Dennis Cimino / The Nexus of Tyranny: Tucson, Aurora and Sandy Hook
195
Afterword
Nick Kollerstrom / Sandy Hook: Analogies with the 7/7 London Bombings
209
Appendices
Appendix A: The FEMA Manual for the Sandy Hook Drill 219
Appendix B: Nick Kollerstrom / The 20 Children and their Homes 239
Appendix C: James F. Tracy / Sandy Hook School Massacre Timeline 245
Appendix D: Crime Prevention Research Center: Comparing Murder and
Homicide Rates before and after Gun Bans 355
Index 361
PDF (422 Pages): Nobody Died at Sandy Hook
Phi Beta Iota: President Donald Trump has made it clear that he understands that there is a Deep State and that it uses false flag events and fake news to manipulate the public. Less clear is whether he understands — we believe he does — the malevolent nature of the Zionist parasite and the sharp distinction between Zionism as an evil anti-American subversive force, and Judaism, a religion most of whose followers are now contemplating the need to boycott Israel until its Zionist apartheid government can be abolished. Our educational non-profit endeavors to inform the public in favor of creating a prosperous world at peace. 9/11 Truth, and the truth about the domestic false flag operations now carried out with impunity by an element of the U.S. Government funded by taxpayers (FEMA) is out starting point toward positive change Of, By, and For We the People.
See Especially:
Memoranda for the President on Sandy Hook: Is FEMA A False Flag Fake News Terrorist Node? Should #GoogleGestapo Be Closed Down?
Robert Steele with SGT Report: The Common Enemy of Russia & the U.S. is the Deep State Shadow Government CENSORED by Anti-Defamation League Saved at BitChute
Review: Nobody Died at Sandy Hook
See Also:
Memoranda for the President on 9/11: Time for the Truth — False Flag Deep State Truth!
Review: And Nobody Died in Boston, either: State-sponsored terrorism with Hollywood special effects
Review: Orlando False Flag – The Clash of Histories
Robert Steele: The Orlando Mass Casualty Event A False Flag Drama, Atrocity, or Hybrid?
Robert Steele: Las Vegas False Flag a Hybrid (Innocent Drill, Rogue Mass Murder Unit)? UPDATE 22 Morphonios on Paddock, Censorship
Please follow and like us: