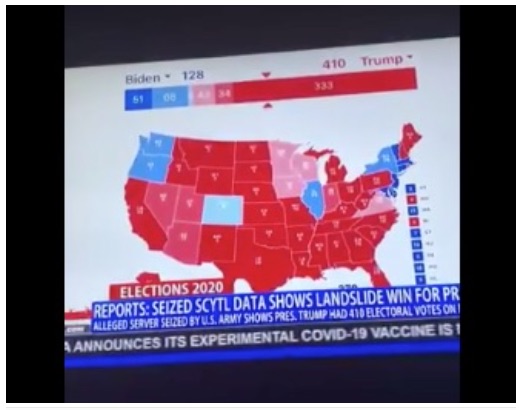 The Trump campaign has charged voting irregularities in dozens of lawsuits since Election Day in a bid to slow the certification of state vote counts.

Two days ago on Thursday, November 19, 2020, at a press conference at the Republican National Convention headquarters in Washington, D.C., President Trump’s legal team presented a summary of the evidence they’ve collected thus far on a “massive, well-funded, coordinated effort to deny” U.S. voters their constitutional rights in the 2020 presidential election.

As reported by Washington Examiner‘s White House correspondent Katherine Doyle, in the press conference, Ellis pointed out if the voting irregularities are not investigated and corrected, “no election will be secure from here on out.”

Citing sworn affidavits and allegations of election fraud in several states, including Pennsylvania, Giuliani (who is now mocked for hair dye dripping down his face during the presser — can’t he afford a better hair dye?) said the team had “enough to overturn any election.” He said that “If you count the lawful votes, Trump won Wisconsin,” and that about 100,000 absentee ballots in Wisconsin were tallied that should not have been.  He also said the campaign was “about to file a major lawsuit in Georgia,” with more litigation ahead, possibly in New Mexico and Arizona.

The legal team linked voting irregularities across the country to a “centralized” conspiracy helmed by George Soros, the Clinton Foundation, Joe Biden, and the deceased Venezuelan leader Hugo Chavez. Powell also claimed there is evidence of the “massive influence of communist money through Venezuela, Cuba, and likely China, and interference with our elections.”

The Trump attorneys leveled their most inflammatory charges at the computer technology of Dominion Voting Systems Corporation which was used by some states to count votes. Powell said:

“The Dominion Voting Systems, the Smartmatic technology software … were created in Venezuela at the direction of Hugo Chavez to make sure he never lost an election after one constitutional referendum came out the way he did not want it to come out.

We have one very strong witness who has explained how it all works. His affidavit is attached to the pleadings of Lin Wood and the lawsuit he filed in Georgia. … As soon as he saw multiple states shut down the voting on the night of the election, he knew the same thing was happening here.”

According to Powell, although the Dominion software was rigged to “yank” votes from Trump by a pre-arranged ratio, Trump was winning so massively on election night that the Democrats went into a panic and stopped counting votes in the battleground states, so as to give themselves time to “readjust” the Dominion software to ensure a Biden win. Powell said:

Note: Attorney Lin Wood filed an affidavit from ex-GOP congressional candidate Russell Ramslad which reportedly showed more votes were cast in at least 19 precincts in Michigan during the 2020 presidential election than the entire population of eligible voters in those precincts. Below is a screenshot of the 19 precincts taken from the affidavit (source: Powerline):

But according to John Hinderaker of the legal blog Power Line, who claims to have seen the affidavit, some of the precincts are actually located in Minnesota and other parts of the Midwest, not Michigan. Hinderaker writes:

Here’s the problem: the townships and precincts listed in paragraphs 11 and 17 of the affidavit are not in Michigan. They are in Minnesota. Monticello, Albertville, Lake Lillian, Houston, Brownsville, Runeberg, Wolf Lake, Height of Land, Detroit Lakes, Frazee, Kandiyohi–these are all towns in Minnesota. I haven’t checked them all, but I checked a lot of them, and all locations listed in paragraphs 11 and 17 that I looked up are in Minnesota, with no corresponding township in Michigan. This would have been obvious to someone from this state, but Mr. Ramsland is a Texan and the lawyers are probably not natives of either Minnesota or Michigan.

Evidently a researcher, either Mr. Ramsland or someone working for him, was working with a database and confused “MI” for Minnesota with “MI” for Michigan. (The postal code for Minnesota is MN, while Michigan is MI, so one can see how this might happen.) So the affidavit, which addresses “anomalies and red flags” in Michigan, is based largely, and mistakenly, on data from Minnesota.

Dominion has “categorically” denied charges of fraud, such as vote-switching, and software errors. On Nov. 11, a panel of voting technology companies, including Dominion, issued a joint statement with Christopher Krebs, director of the Department of Homeland Security’s Cybersecurity & Infrastructure Security Agency that vouched for the reliability of the 2020 election, rebuked the Trump legal team’s allegations: ”There is no evidence that any voting system deleted or lost votes, changed votes, or was in any way compromised,” the statement reads.

Six days later on Nov. 17, Trump fired Krebs in a tweet, saying that Krebs’ defense of the security of the election was “highly inaccurate.” Indeed, without having seen the evidence amassed by Trump’s legal team, how would Krebs know that the election had not been compromised?

Honest people do not fear transparency.

Despite its denial of any wrongdoing, on Thursday night after the legal team’s press conference, Dominion Voting Systems abruptly backed out of attending a fact-finding hearing that was set for Friday morning with the Pennsylvania House State Government Committee “to help identify and correct any irregularities in the election process.”

Committee Chair Seth Grove said he wants to know why a company with nothing to hide would back out, and that the 1.3 million Pennsylvanians who used Dominion’s voting machines have been “hung out to dry and slapped in their faces.” (ZeroHedge)

Additionally, tweeter Rosie memos discovered that over 40% (100+) of 243 Dominion employees have deleted their profiles on LinkedIn since election day.

For what you can do to help Trump’s legal team: “2020 election irregularities: Why President Trump is contesting supposed results”.

UPDATE: Sidney Powell told TheBlaze TV host Glenn Beck: “We will start putting documents online and sending them to people like you, as soon as we possibly can. I would hope that we could start that by this weekend.”

Drudge Report has gone to the dark side. Check out Whatfinger News, the Internet’s conservative frontpage founded by a military veteran!