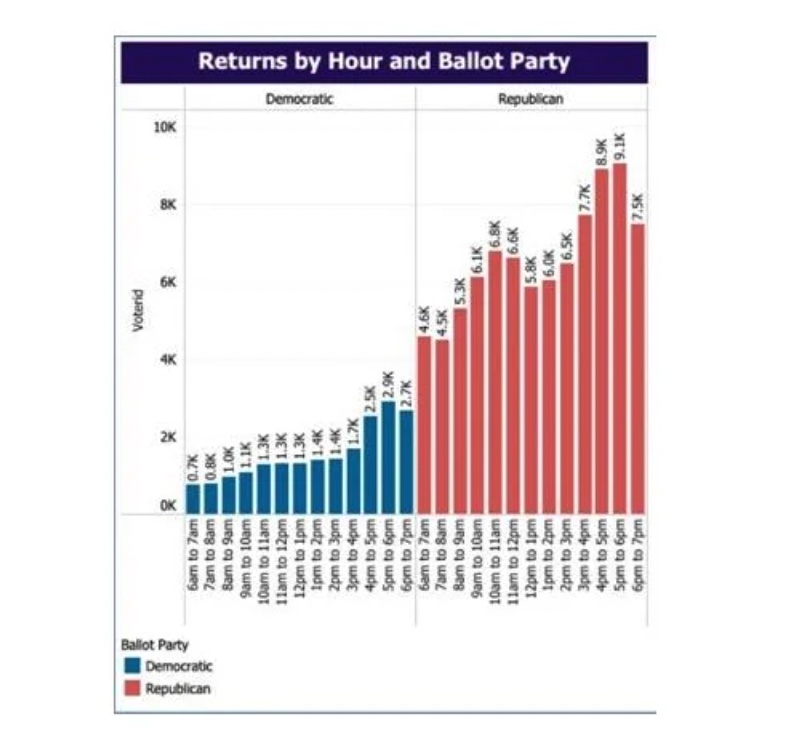 On Election night at 8 PM Uplift Data released its final hourly results on the Arizona and Maricopa County elections.

Throughout the election cycle, Uplift posted the latest updates on mail-in ballot counts on its website as ballots arrived in the weeks leading up to Election Day. This was a great tool for Democrats to understand the real-time results. On Election Day Uplift tracked the hourly reported results from precincts across Maricopa County.

When the polls closed at 8:00 PM MT Uplift released its final analysis from the day.

The “other” category is likely independents leaning Republican and Republican voters who refuse to talk to liberal pollsters.

So, again, according to Uplift Data tracking service Republicans had 52.7% of the vote on Election Day.

Democrats had 16.6% of the vote on Election Day.

Since Tuesday night Maricopa County has slow-walked their actual results to the press.

Katie Hobbs has won every ballot drop, except two, from Maricopa County since Tuesday extending her lead over Kari Lake by 34,000 votes.

BUT THAT IS NOT ALL—
80.0% of In-Person Voters in Maricopa County on Election Day Voted Republican – Only 23.4% Voted Democrat

Maricopa County had 106,588k voters show up Tuesday to vote in-person. Of those, a record breaking percentage voted for the GOP. In Arizona, anyone registered as an “Independent” can show up to the polls and request either a Republican, or Democrat ballot. In Tuesday’s Primary, 80.0% who voted in-person selected a Republican Party ballot. Only 20% used the Democrat ballot.  The charts below provide various details. The graphs in this story are a stunning for a couple reasons. They show incredible promise for Republicans in the 2022 General Election. But this data didn’t come from the GOP. It came come from the Democrat analytics organization called UpLift, formerly Saguaro Strategies. Every day leading up to election day, UpLift was tracking ballot returns in near real time, down the precinct level detail. They undoubtedly have very strategic data that helps Democrats influence elections. Their head of operations posted dozens of charts on Twitter today that were updated hourly throughout the election. Graphs and charts posted on UpLift’s website displayed ballot returns as the Arizona election evolved over weeks, accurate to within hours. They use Tableau Software, a visual analytics company, which happens to be owned by Salesforce.com. They have offices in Berkley, D.C., Phoenix, and Detroit. Their data on Arizona mail-in ballot returns allow you to dissect voter participation by County, Congressional or Legislative districts, City, Party, Age, Gender, and so on. Jim Hoft is the founder and editor of The Gateway Pundit, one of the top conservative news outlets in America. Jim was awarded the Reed Irvine Accuracy in Media Award in 2013 and is the proud recipient of the Breitbart Award for Excellence in Online Journalism from the Americans for Prosperity Foundation in May 2016.