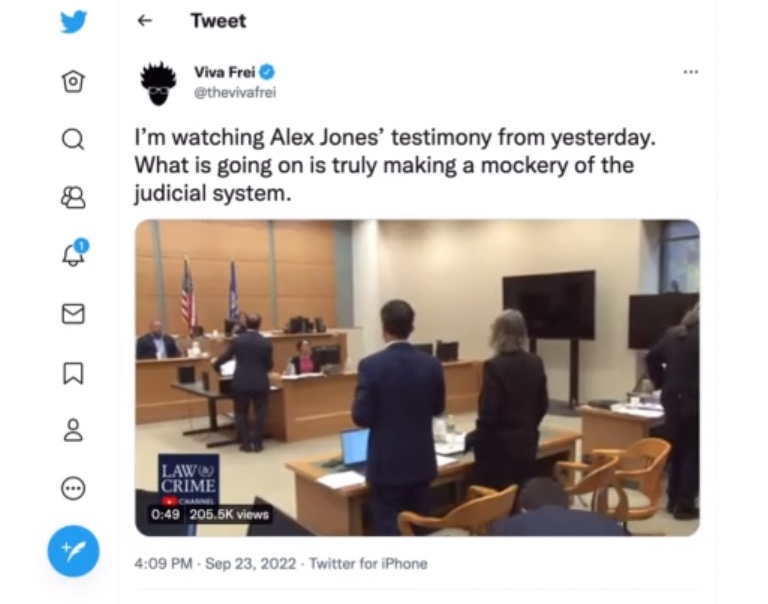 With Barnes’ revelations in mind, it’s brazenly apparent that Alex Jones has been marked for destruction by the NWO and is the test case for the latest iteration of lawfare designed to destroy political opposition. You can help Alex in this vital hour at Saveinfowars.com.

Full interview: (Skip to the 1:34:00 mark to hear the bombshell discussion.)

Below are timestamped highlights from Barnes as chronicled by Jim Hoft from The Gateway Pundit:

1:35:45 – Barnes explains: Alex Jones almost never denied Sandy Hook happened. (On his show) he answered two callers’ questions. It wasn’t tied to any advertising at all, at any time. Why is Jones not allowed to explain this (in court)?  None of his financial success had anything to do with Sandy Hook.

The main evidence of this is two things. Over 99% of everything InfoWars published and broadcast actually said that Sandy Hook happened. Their Sandy Hook coverage was less than 1% of all coverage during the time frame. Those are critical facts that tell you if he made money or not. If you imputed value to it, this would be 1/1000th of 1%. The plaintiff’s have all his financial information, the dates he made those statements, and you could tie it in (as profiting). So why haven’t they?

1:38:20 – They have to build a lie for the jury to buy, in order to get a big check, for things that don’t even relate to compensatory damages. The Plaintiffs are allowed to present all the evidence that suggest he’s rich and famous off of Sandy Hook. But Jones is not allowed to explain he’s in bankruptcy, didn’t make money off Sandy Hook, and hardly ever covered it. Why is he not allowed (to say this in front of the jury) – because the truth would lead to a low verdict.

1:39:14 – This is a fake case, about supposedly fake news. You have a corrupt judge and a rogue ambulance chasing Plaintiff’s lawyer, trying to tell a lie to the world, with help of liberals like Elizabeth Williamson of the New York Times, who is the real person who has grifted and made money off Sandy Hook. You know who the biggest money makers are off of Sandy Hook? The Media. The media knows every time they glamorize a mass shooter, that it increases the probability of another mass shooting. And the media want it to happen. Because they line their pockets with it. And the Democrat politicians in Connecticut, aligned with this corrupt court system and lawyer, also make political gain off of it. Because it’s their excuse to take away everybody’s guns.

There is an incentive for the media and Democratic politicians. They’re weaponizing this case, in part, to encourage another mass shooting to happen. They want it, because they get rich off it, and get political power off it. That’s the reality they don’t want anybody talking about, because that’s what Alex Jones was talking about (back then).

1:41:25 – Barnes explains why Judge Bellis banned Jones from making crucial disclosures in court. “Mostly it’s for them to be able to tell a lie to the jury, to write a big check, when none of it is relevant to the trial at all. The fear is if jury hears about Jones bankruptcy….they hear punishment, they hear suffering, they don’t see a super rich guy getting powerful off of Sandy Hook. It completely negates the Plaintiff’s narrative.

1:42:10 – If you watch that (courtroom) examination, the Plaintiff’s lawyer was falsely trying to imply that all of Jones money and success….that he’s currently very successful, and all of it comes from Sandy Hook. Both of which are lies that this corrupt court wants the jury to believe are true. The judge actually ordered Alex Jones couldn’t give meaningful answers, he can only respond with “yes,” “no,” or “I don’t know.” If you want to see how not to be a lawyer, watch this political hack Chris Mattei in court. This was not only theater, it was bad theater, a bad show trial. Even civil law people that are hostile to Alex Jones are saying they can’t justify this judge’s behavior, can’t justify Chris Mattei’s behavior.

1:44:56 – Barnes makes clear that Jones never went to the victims’ home, never interviewed them, and only mentioned one name in passing. This is in stark contrast to what others have done, and continue to do. This is so bad, Elizabeth Williamson of the New York Times loves to grift off of Sandy Hook. She loves to make money off these people’s pain. Everything they accused Alex Jones of, is who these plaintiff lawyers are, is who Williamson is. They love it when these parents suffer horribly because they can just go cha ching, cha ching, with interview after interview, with big pharma ads in between. Just filling their pockets.

1:45:36 – This whole case has been an exposure of confession through projection. What they accuse Alex Jones of is exactly what Elizabeth Williamson is guilty of. It’s what the New York Times is guilty of. It’s what CNN is guilty of. And Williamson goes out and makes a totally false statement. She said Jones was not called to the stand by his own lawyer because of how horrible Jones was on the stand. This was a complete fabrication, a total lie. Also, Jones has repeatedly apologized to the family’s, but won’t apologize to the ambulance chasing Plaintiff’s lawyer.

1:47:50 – What Jones says outside the courtroom about a court, I’ve never heard of that ever being relevant during a trial, ever in my life. It has no relevance to compensatory damages. Jones had referred to Judge Bellis as a “tyrant”. While on the witness stand, Mattei asked Jones if he refers to everyone he doesn’t like as a tyrant. Jones replied “Nope, only those that act like tyrants”. Barnes explains the ramifications of corrupt actions by those like Judge Bellis and lawyer Mattei. They instill doubt in the justice system itself. This leads to undermining our belief in the justice system of our own government….and diminishes confidence in the outcome.

h/t to Jim Hoft for chronicling this important conversation.