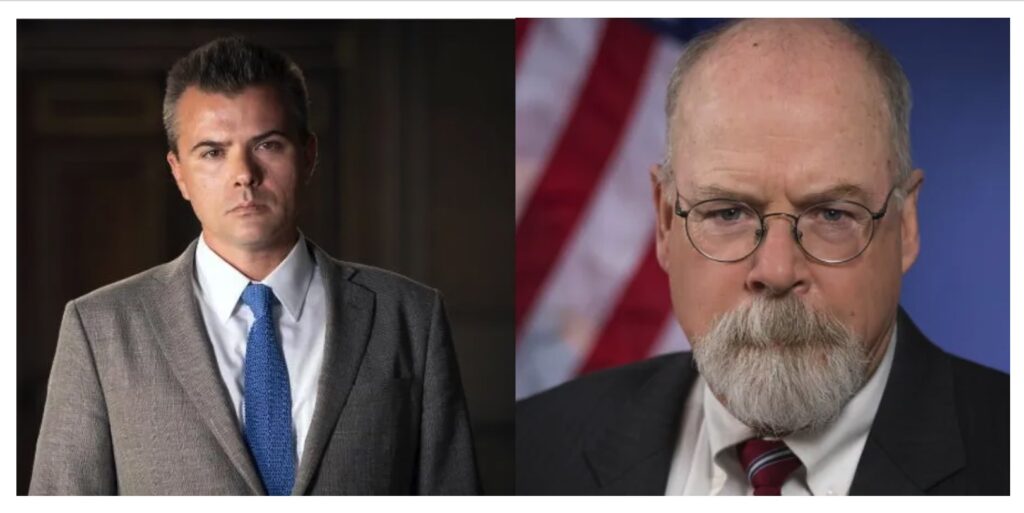 Today, Special Counsel John Durham moved to unseal this motion in limine in the false statements case against Igor Danchenko.

This motion provides new information on the details of Danchenko’s lies to the FBI, further information on how Special Counsel Mueller ignored Danchenko’s false statements, expected testimony from Clinton-connected executive Charles Dolan, and one crazy development.

But we’ll start with the the most damning development: Danchenko was on the FBI payroll as a confidential human source (CHS) from March 2017 through October 2020.

The purposes of making Danchenko a CHS should be quite clear. The Crossfire Hurricane investigation was plagued with problems from the outset. The reasons for opening the investigation were bunk. Those problems continued as the investigation went on, with claims of Trump/Russia collusion proven unverified or outright false. (Thus the targeting of Flynn for a Logan Act violation.)

That developed into the Carter Page FISA applications, first submitted to the Foreign Intelligence Surveillance Court (FISC) in October 2016, and which relied substantially on the Steele Dossiers (aka Steele Reports). The FISA applications were renewed three times – more on that later. Each application had its own problems, from FBI lawyers lying about Carter Page to the Court being generally misled.

Realizing its own misconduct, the FBI made Danchenko a paid CHS in March 2017 – just before the third FISA warrant was submitted in April 2017. This would allow Comey’s FBI to work directly with Danchenko in support of its counter-intelligence investigation against President Trump.

Danchenko being a CHS also served another purpose: it protected the Bureau and the Mueller Special Counsel from revealing their “sources and methods.” How do you hide misconduct? Bury the witness.

Context helps – here’s a brief timeline of the Danchenko interviews and other important events:

For background purposes, here’s our discussion on the Danchenko indictment and what the FBI knew about Danchenko’s Clinton connections. Recall that Danchenko was indicted for multiple false statements given to federal officials during the Trump/Russia investigation. Anyways, back to today’s motion.

The Motion in Limine

When the Steele Reports were released, the media picked-up on the most salacious rumors, one that was utterly unbelievable: that Russian intelligence had a video of Trump involved with prostitutes at the Moscow Ritz-Carlton Hotel. Also known as the “pee tape.”

The allegation came from Danchenko, who attributed it to his sources – one from the Ritz-Carlton, and another being Sergei Millian. Durham will refute it, as it expects to call at trial “Bernd Kuhlen,” the then-general manager of the Ritz-Carlton, who will deny speaking with or ever meeting Danchenko “in June 20165, or at any time.”

As to Sergei Millian (more on him later), Durham will show that Danchenko falsely stated to the FBI that this information from Millian “came from a single ten, or fifteen minute anonymous phone call that allegedly took place in late-July 2016.” That timing is of particular importance, as explained by Durham:

Then there are Danchenko’s false statements about Charles Dolan, an influential Democrat executive with ties to the Clintons. Interestingly, it was Dolan who was given a tour of the Ritz-Carlton Presidential Suite, which was the supposed location of “Trump’s alleged lurid sexual activities.”

In fact, Dolan is expected to testify at trial. According to Durham:

the Government anticipates that Mr. Dolan will testify that (1) it was he and Mr. Kupka who attended a lunch with the Ritz-Carlton general manager and other hotel staff during the June 2016 Moscow trip and that [Danchenko] was not present, and (2) neither Donald Trump nor his purported sexual practices were ever discussed at that lunch. Further, the Government also anticipates that Mr. Dolan will testify that Ritz-Carlton hotel staff did, in fact, provide the aforementioned tour of the presidential suite as part of the June 2016 trip and that, again, Donald Trump and his purported sexual practices were not discussed during that tour.

What is Durham’s theory on Danchenko’s motive for lying about the Ritz-Carlton allegations? Because it reflects “a deliberate effort to conceal from the FBI Charles Dolan’s role as a source for the Steele Reports and to deceive the FBI regarding Millian’s role (or lack thereof).”

In support of the theory that Danchenko engaged in an “over-arching ‘plan’ to deceive the FBI” about his work for Orbis (the company who collected the information contained in the Steele Reports), Durham also plans to introduce:

There’s more. Back in February 2016, nearly a year before his FBI interview and months before he started collecting information for Christopher Steele, Danchenko told a former employer how to fabricate sources:

The relevance of that e-mail? Danchenko’s advice to “attach multiple sources to information and obscure one’s own role as a source for information is consistent with [Danchenko’s] alleged false statements in which he denied or fabricated the roles of these individuals.”

The E-Mails and Steele’s Representations to the FBI

Also expected at trial, if allowed by the judge, are e-mails to/from Danchenko where he discusses his unsuccessful efforts to reach Millian.

Additionally, there’s an email where Christopher Steele informed the FBI that Danchenko “had met with Sergei Millian on two or three occasions – at least once in New York and once in Charleston, South Carolina.”

We brought up Mueller back at the introduction, and here’s why. Steele relayed information to the Mueller Special Counsel about the Millian/Danchenko meetings that they knew was false. Similarly, Danchenko revealed information that Steele’s reporting was false. What did Team Mueller do with that information? They hid it from the FISA Court and from the public. Danchenko continued as a CHS throughout Mueller’s service as Special Counsel. Danchenko couldn’t be touched because of his status as CHS, thus protecting Mueller and the FBI.

Sergei Millian Will Not Testify at Trial.

Sergei Millian, a key witness for Durham, will not testify at trial. Millian is currently abroad. He has voiced his concerns for his safety, stating he does not trust the FBI. Can’t really blame him at this point. At this point, Durham can’t compel Millian’s attendance.

Certainly Millian is a key witness. But key doesn’t mean necessarily mean essential. The Danchenko e-mails and inconsistent claims are damning enough, and he can be convicted in Millian’s absence. It hurts – but isn’t fatal to – Durham’s case.

The FBI’s prior counterintelligence investigation of Danchenko.

When reports surfaced of Danchenko’s imminent indictment, we made an educated guess that he would be charged for giving false statements relating to his prior contacts with Russian intelligence.

NYT: Special Counsel Durham is focusing (in part) on Steele Dossier primary sub-source Igor Danchenko. We suspect potential false statement charges against Danchenko for lying to the FBI about his contacts w/ Russian intel. Good reporting by @charlie_savage and @adamgoldmanNYT

Exclusive: To partly answer Trump’s q re Durham, he’s been scrutinizing the Steele dossier. Among other things, in Feb he obtained by subpoena records from Brookings Institution on the dossier’s main researcher, who used to work there. w/ @adamgoldmanNYT https://t.co/czuLk1J3uQ

Back in 2008, while Danchenko was employed with the Brookings Institute, he had approached “two fellow employees about whether one of the employees might be willing or able in the future to provide classified information in exchange for money.” The conducted a full investigation into Danchenko after learning he “had been identified as an associate of two FBI counterintelligence subjects and (2) had previous contact with the Russian Embassy and known Russian intelligence officers.”

While we were perhaps too optimistic about those false statement charges (not without good reason – Durham points out Dancheno’s denials about contacts with Russian intelligence), Durham is seeking to introduce evidence of those lies to establish that Danchenko’s lies were material.

The rationale? That the question of whether Danchenko conducted work on behalf of Russian intelligence (not the allegation, just the question) could be important to investigators. Even if the Comey/Mueller investigators didn’t want to dig that deep.

We also note that Durham expects Danchenko’s defense to “introduce evidence of FBI investigations into other individuals who the Government anticipates will feature prominently at trial.” What other individuals? Millian and Dolan and Steele, for starters.