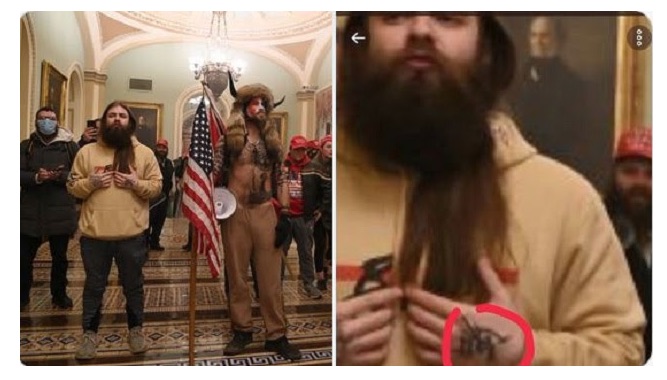 Yesterday, January 6, 2021, as Congress critters convened in a joint session to certify the Electoral College’s votes for Joe Biden as the winner of last November’s presidential election, tens of thousands of patriots descended on Washington, DC, to protest the rampant election fraud that state governments and the courts, including the Supreme Court, simply refused to even investigate or give a hearing.

At about 1:00 p.m., some of the protestors advanced on the Capitol building. At about 2:15 p.m. the barricades manned by the District of Columbia police were breached, and Capitol security advised the members of Congress to take cover. Rioters broke past security to enter the Capitol itself, some on foot, some used ropes and makeshift ladders to invade the building, and some broke windows to get in.

Police officers drew their guns inside the House of Representatives chamber and pointed them towards the doors to the chamber, which were barricaded with furniture. In a stairway, one officer fired a shot at a man coming toward him. Police shot an unarmed female protestor, Ashli Babbitt, while she was climbing through a barricaded door behind the House chamber. Babbitt later died from her injuries.

During the 4-hour seige of Capitol Hill, numerous acts of looting and vandalism occurred, including the office of Speaker of the House Nancy Pelosi, where tables and flipped and photos ripped from walls. Observers saw “debris, trash, all in the elevators, things knocked down, posts knocked down” in all parts of the building. Glass windows were broken in the National Statuary Hall. Rioters chased away reporters and trashed the Associated Press’ recording and broadcasting equipment outside the Capitol building.

“Multiple” police officers and protestors were injured. In addition to Ashli Babbitt, three other protestors died after suffering “medical emergencies,” including at least one heart attack. (CBS News)

Capitol Hill was locked down. National Guards were called in. DC mayor Muriel Bowser, a Democrat, declared a curfew and extended a public emergency declaration until January 21, the day after the presidential inauguration.

Independent journalist Andy Ngo, who has chronicled the violence of Antifa movement in Portland OR, dismissed claims that the rioters were actually Antifa because, in his words, “The people occupying the Capitol building do not look like antifa people dressed in Trump gear or Trump costumes.” (Washington Examiner)

Seasoned journalist Brit Hume believes otherwise. He tweeted: “Do not be surprised if we learn in the days ahead that the Trump rioters were infiltrated by leftist extremists.”

Hume’s suspicion seems to be borne out by the following evidence of Antifa and BLM elements among those who stormed Capitol Hill.

OANN (One America News Network) correspondent Jack Posobiec tweeted: “Eyewitness reports one of the first people to break a window at the Capitol wearing a US flag shirt but took it off and tossed it in bush after. Others in dark clothing urging people to rush forward, starting anti-govt chants in crowd.”

Some tweeters say this bearded guy has the Communist hammer-and-sickle tattoo on his hand:

But others say the tattoo is from the video game “Dishonored”.

Below is a comparison of the bearded guy’s tattoo, the Dishonored symbol, and the hammer-and-sickle:

Tweeters say a rioter wearing a horned buffalo hat is not a pro-Trumper because he had been seen at a BLM march in Tempe, AZ, in June 2020.

Buffalo-hat guy has a tattoo of what appears to be the boy-lover pedophile symbol on his chest. No MAGA patriot would have a tattoo like that.

But other tweeters point out that the tattoo is actually the Valknut, a symbol of three interlocking triangles from the pagan Norse mythology, used by white supremacists who call themselves Soldiers of Odin, willing to give their lives in battle for the Norse god Odin.

Another tweeter claims that beneath the Valknut tattoo are other Vking symbols: the Yggdrasil tree, Mjolnir and Thor’s hammer.

According to the Associated Press, buffalo-hat guy, whose name is Jake Angeli, is a Trump supporter.

Angeli is an actor and voiceover artist, who also goes by the name of QAnon Shaman. (News.com.au)

After Capitol Police secured the U.S. Capitol, the House and Senate reconvened, and certified the Electoral College vote, followed by Vice President Mike Pence confirming Joe Biden as the winner of the presidential election.

Conceding the election, Trump said in a statement that “there will be an orderly transition” on Jan. 20. (Fox News)

Drudge Report has gone to the dark side. Check out Whatfinger News, the Internet’s conservative frontpage founded by a military veteran!

77 thoughts on “Dr. Eowyn, Were Antifa thugs among those who stormed Capitol Hill?”