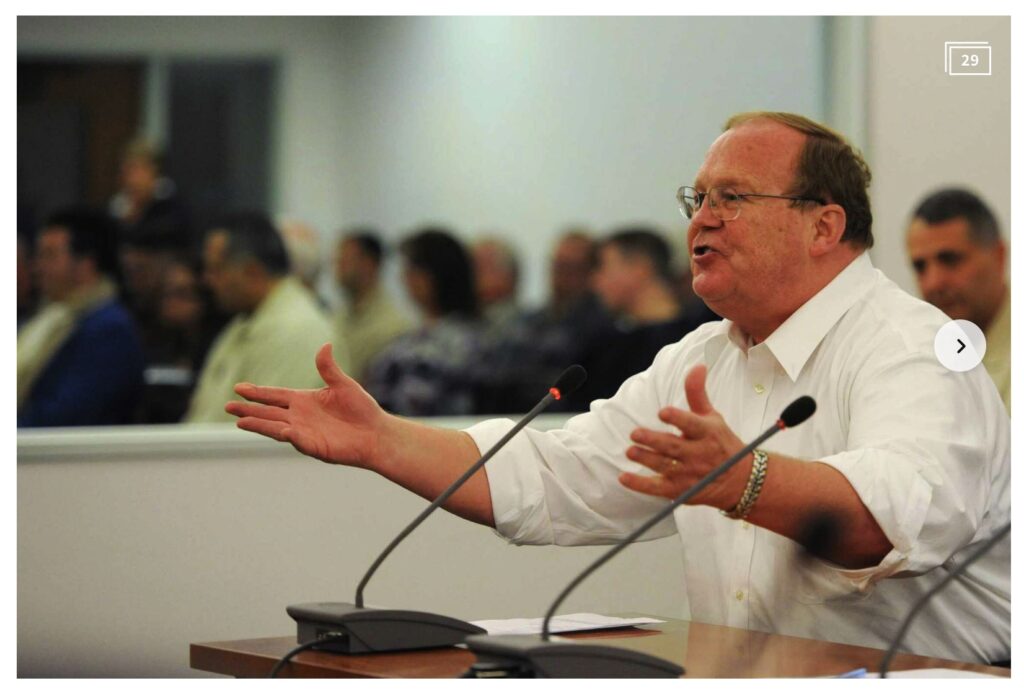 [Editor’s note: The photo is of Wolfgang Halbig, a former Florida State Trooper and school principal, asking questions about the Sandy Hook Elementary School shooting during the public participation section of the Board of Education meeting at the Newtown Municipal Center Council Chambers in Newtown, Conn. Tuesday, May 6, 2014. I was there and spoke second. Wolfgang will be my guest on The Raw Deal (28 September 2022) Noon-2 PM/ET. Listen LIVE via freedomslips.com, Studio B.]

Let’s start with a quick recap of the hoax story. A 20-year-old boy named Adam Lanza, at his home in Newtown CT, shot his Mom dead, on the morning of Friday, December 14, 2012, using a rifle from her collection. He then proceeded to drive to the Sandy Hook school, arriving by 9:30am, where he broke a glass door to get in. He then murdered 20 children ages 6 and 7, plus six staff members.

There are no video shots of this happening and no sound of it on the school’s audio. A few people saw “holes in the story” early on. (Not me, I fell for it.)

Among the noisiest complainers, some were arrested, sued, or sacked — respectively Wolfgang Halbig, James Fetzer, and James Tracy. An angry local, William Shanley was, we surmise, killed. I won’t mention the conspiracy theorist Alex Jones as he is a gatekeeper; he has been part of the system all along. (I never fell for him.)

I call for the immediate arrest of all persons, including the “parents” and the media “reporters,” who conjured up this “tragic” event. The only thing tragic about it is that it gave the US government time to string us along for ten years while they increased their lying. By this point, the lies of Sandy Hook should be considered Olympic bronze medal material. (I’m saving the silver for the Boston Marathon bombing, and the gold for NIne-eleven.)

This article presents a six-part outline of the exhaustive sleuthing done by Wolfgang Halbig, a Florida guy who had been a state trooper — and therefore knew what type of reports should have been logged in by police on that day in December 2012. He had also been a school safety consultant, so knew what kind of protections are standardly in place.

Being American, Halbig knew that Congress passed a Freedom of Information Act (FOIA) in 1966 and that the state of Connecticut has a similar law. (Oopsie, CT legal advisors, you forgot to get that one repealed before “Adam Lanza” Day. Oopsie.)

Halbig learned a huge amount about this terrible false flag, by sending FOIA requests. Even when he does not get a reply — after many tries — that’s good evidence of crime. Remember the maxim “Omnia praesumuntur, contra spoliatorem” — everything can be charged against those who hide or destroy the evidence.

I’ll quickly divide Halbig’s findings into six parts. You can then see many further details at therealcolorado.org, as penned by Alison Maynard.

Part One: A Press party in Crowne Plaza Hotel. As admitted by sales manager Kate Trudeau, that hotel (in Southbury CT, now renamed the Wyndham) was heavily booked on the day before the massacre by government and media persons.

Boy, does this ring a bell with Aussies; major media persons assembled the day before the 1996 Port Arthur massacre, in a local hotel “for a conference.” (Even funnier on that occasion, a teach-in for Emergency Room physicians was also being held in nearby Hobart. That massacre had actual casualties.)

Part Two: Dash cams. Police have mandatory cameras on the dashboard of their car, which show the hood. To the small extent that Halbig received any requested videos from cop cars, none were the dashcam type; they may have been shot out the window. (Why?)

Their time stamps are a major giveaway that nothing went according to the narrative that we suckers in the public were fed. Example: three photos from Car 13, purportedly driven by Officer Chapman, all have the same time stamp for the same moment (9:21:43 a.m.); this can’t be real.

Part Three: Proof that there was no school operating, in December 2012, at the campus. We were all shown “Sandy Hook Elementary School” at 12 Dickinson Drive, Newtown, near a firehouse and near the home of Gene Rosen. (I think that Rosen’s ever-changing story at interviews was a strategy to get sleuthers involved from Day One, looking at unprovable minutia — same for the “press conference” of Robbi Parker.’).

Halbig ascertained that the campus lay empty since the beginning of the school year in September 2012. He got this from the minutes of school board meetings, and from tracing the delivery of lunch food to the “wrong” location, namely, to Chalk Hill School which is where the real Sandy Hook pupils attended.

Also, Halbig found from a whistleblower that Google Earth had been providing, since March 29 (nine months before “the shooting”) an image of Sandy Hook when readers asked for the address “375 Fan Hill Drive, Monroe CT” — which is Chalk Hill School’s address.

Part Four: GoFundMe. Sometimes with the help of anonymous conspiracy theorists, Halbig learned of eulogies and fundraising having been uploaded to websites on the day before, or several days before, the “tragedy.” Fathom it. Such sloppiness. But I thank those sloppy people.

Part Five: A surviving witness lies. Ms Kaitlin Roig claims to have herded 15 kids into a small bathroom in her classroom and locked it for safety. How did Wolfgang Halbig find official evidence that this part of the story is fake? First, there was no inside lock in that door. Second, the CPS (Connecticut Police Service) report includes two photos of the alleged classroom of Roig, one with a round window on the door, one with a square window.

(You may be wondering how such a small piece of evidence could “out” the whole hoax. I believe it could. The district attorney could charge Ms Roig with perjury, and let a jury work things out. Even without Roig, the police should be forced to testify about the discrepant photos.)

By the way, Halbig can sue under the tort of “malicious arrest” for what happened to him in Florida in the middle of the night. We would thus learn which member of CT government (or mafia, as the case may be) instructed Florida police to grab Halbig. This is going to be a blast.

Part Six: Porta-potties. We have all seen, in early videos such as the onsite interview of neighbor Rosen, that there were porta-potties near the “school” — as would be normal when a FEMA drill is in progress. (Federal Emergency Management Agency is part of Homeland Security).

We could also see the electronic sign “Everyone must sign in.” Remeber that? So what do you think Halbig sought about that in a FOIA request? Why, the logbook of those who signed in, of course. Do you think he got a reply — as is mandated by the Freedom of Information law? Oh, please.

My Recent Efforts on the Legal Front

There is much, much more to the list of Halbig’s clever investigations. Owing to the fact that a crucial date is coming up, the US Supreme Court’s deciding, on October 7, to take or not take the case of Pozner v Fetzer, I have tried to add some new material to the public file.

Please see, at GraniteGrok.com, my 23 August 2022 item “Update on Alex Jones Defamation of Sandy Hook Families and the Maureen Crowley Quote,” or my GumshoeNews.com article of September 25: “A Suggestion for SCOTUS: Certiorari for Pozner v Fetzer.” Or read my 2022 book: Unreality: Sandy Hook Messes Minds.

We need to jump at this. It will have to be citizen action; clearly no one in office will touch it. I’ll start by sitting outside the New Hampshire State House (its plaza is geared up for this, thank God) in case anyone wants to chat.

I’ll be there today, Tuesday September 27, 2022 at 5pm (Concord NH, Main Street) and tomorrow Wednesday September 28 at noon. I am short, old, and have reddish hair. I will wear black.

You can email me to discuss Sandy Hook, at MaxwellMaryLLB@gmail.com. Why not invite me to speak at your venue — I’m still walkin’ the earth and who knows for how long?

Last week I sent, to the Chief Clerk of Court in Waterbury CT, a petition for a writ of Error Coram Nobis, which is a writ of right. I used return-receipt-requested form of mailing but have not received a signed green postcard in return. Naturally I’m very inclined to use strictly the available judicial mechanisms, but my track record of success is zilcho thus far.

Gotta think of a way to stop being lied to, wholesale. It will be the death of us. Have you thought that, too? Think of the vax lies, still proceeding full blast from the media.

Onward, Christian soldiers, come on, get into the action. Do something.